Amazon’s much anticipated fourth-quarter earnings report was released on Tuesday evening. The Amazon Q4 earnings report showed some pretty impressive numbers, a big increase in cost of shipping goods, and also some breaking news in that Jeff Bezos would be leaving his post as Amazon’s CEO. There was a lot to unravel in this report; we’ll cover all of the need-to-know data and what it means for Amazon sellers in this Q4 earnings report recap.

The company’s core e-commerce portion of the business received a number of boosts at the end of last year, including an ongoing consumer shift to online shopping during the COVID-19 pandemic and sales from Amazon’s blockbuster Prime Day. The event was shifted to October from July this year due to disruptions from the virus. Here are some other key stats to from the report.

Jeff Bezos Stepping Down as CEO

Amazon announced that in Q3 of 2021, Jeff Bezos would step away from his role as the company’s CEO. He will be replaced in the role by current Amazon Web Services CEO Andy Jassy. This news is jarring at first sight as Bezos is synonymous with Amazon’s success, but the multi-billionaire will still be heavily involved in the company’s proceedings as its new executive chairman.

Bezos has steadily been transitioning out of his CEO duties over the last couple of years before the COVID-19 pandemic struck and Jassy is highly qualified to step into the position. The change should not negatively effect Amazon in any way in the short or long term, especially with Bezos still remaining as the company’s primary shareholder and in a position of power.

What Sellers Should Take From the News

Overall, sellers should be excited about the present and the future when it comes to selling on Amazon. The company may not replicate or surpass these sales numbers in 2021 as more retail stores begin to open up after the coronavirus vaccine becomes more widespread. But there also aren’t any indicators to suggest that Amazon won’t still own a massive share of the market and continue to be the preferred retail option for millions of Americans.

Here’s the projected breakdown of e-commerce market share by retailer for 2021, according to Digital Commerce 360. 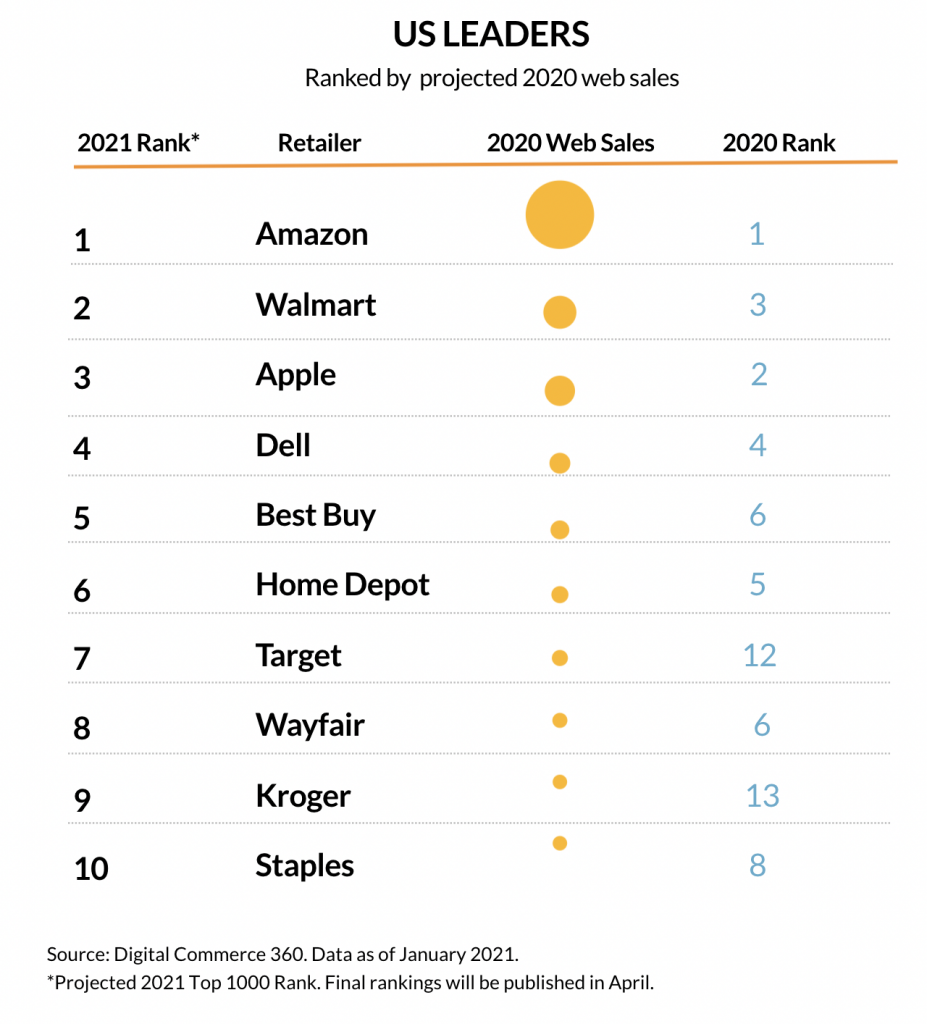 One statistic that sellers should pay attention to is the rise in the cost of shipping goods. When costs rise, third-party sellers often end up being affected with additional costs and fees. Along with shipping costs, lowering Amazon seller fees is one way to increase margins at the expense of decreasing other losses/fees. Or, maybe you’re looking to start sourcing your products from India. One major benefit is the lower trade tariffs, along with a handful of other reasons to consider having your goods manufactured in India.

As these inevitable increases roll out in 2021, using a Profit and Loss Tracking Tool like the one offered by FeedbackWhiz can help you keep track of all of your expenses and make sure that your products are still profitable.

Want to get these updates delivered directly to your inbox? Subscribe to our newsletter by signing up below!

This website uses cookies to improve your experience while you navigate through the website. Out of these, the cookies that are categorized as necessary are stored on your browser as they are essential for the working of basic functionalities of the website. We also use third-party cookies that help us analyze and understand how you use this website. These cookies will be stored in your browser only with your consent. You also have the option to opt-out of these cookies. But opting out of some of these cookies may affect your browsing experience.
Necessary Always Enabled

Any cookies that may not be particularly necessary for the website to function and is used specifically to collect user personal data via analytics, ads, other embedded contents are termed as non-necessary cookies. It is mandatory to procure user consent prior to running these cookies on your website.